KiwiRail is taking the next step to procure a new generation of Cook Strait ferries which will increase the capacity on this vital transport link, and increase its resilience.

A Request for Proposal (RFP) to find a preferred shipyard to build two new ships for the Interislander is being issued today, the next step in the procurement process.

“The new ships will strengthen and enhance the vital transport link between the North and South Islands and represent a once-in-a-generation opportunity to transform the Cook Strait crossing,” Group Chief Executive Greg Miller says. The ferries are extensions of State Highway 1 and the Main Trunk Line across Cook Strait, linking road and rail networks between the two islands.

Currently, Interislander operates a fleet of three ferries, moving some 800,000 passengers and up to $14 billion worth of road and rail freight between the North and South Islands each year.

The $400 million contribution in Budget 2020 has enabled KiwiRail to go out to international tender to build the new ships, which are intended to arrive for service in 2024 and 2025. When the ferries are delivered, it will be over 25 years since New Zealand last introduced a brand-new purpose-built ferry to its fleet.

The $400 million towards the ferries and KiwiRail’s infrastructure at the ports in Wellington and Picton builds upon a $35 million-dollar investment in last year’s Budget for ferry design and procurement work.

“On behalf of New Zealanders, we are grateful to the Government for enabling this acquisition,” says Mr Miller. “It is exciting to issue this RFP, to move the project forward and to find a shipyard to partner with KiwiRail to deliver the ships to our specifications, quality and timeline requirements.”

“Only overseas shipyards have the ability to build ferries of the size and standard needed for the Cook Strait. However, the project also involves new infrastructure including terminals, linkspans, and marshalling yards which will create numerous Kiwi jobs in Picton and Wellington. Community engagement has already begun in Picton for the proposed new terminal there.

“We are engaging our Interislander staff in the design of the ferries to ensure the ships are not only great for passengers, but also for those who work on them.

“Our new ferries and the associated port infrastructure will provide greater resilience for this crucial link that unites our country and will serve New Zealand for the next generation and beyond.”

KiwiRail’s iReX Project was established to replace the existing three ship fleet with two new, large, rail-capable ships to be brought into service during 2024 and 2025.

KiwiRail has engaged a leading ships’ architect, to design the ferries, and is working with a world-renowned ship broker to progress the procurement process.

The new ferries will be nearly 40 metres longer and at least five metres wider than the current vessels, to meet the expected freight and passenger growth over the next 30 years.

The two ferries will be able to carry twice as many passengers as the current three ship fleet, 300 per cent more rail wagons and almost double the number of trucks and other vehicles.

The new ships will be much more fuel efficient and produce significantly lower CO2 emissions.

They will also be high tech, including the latest propulsion systems, and able to run on battery power at times. KiwiRail is also future proofing the design so new fuel sources can be adopted as they become available.

We completed the ship Request for Information (RFI) process in February 2020, which involved completing due diligence visits to interested shipyards, and completing a final evaluation to establish a short list to proceed to the RFP stage.

The RFP process to identify the successful shipyard is expected to be completed before the end of the year. 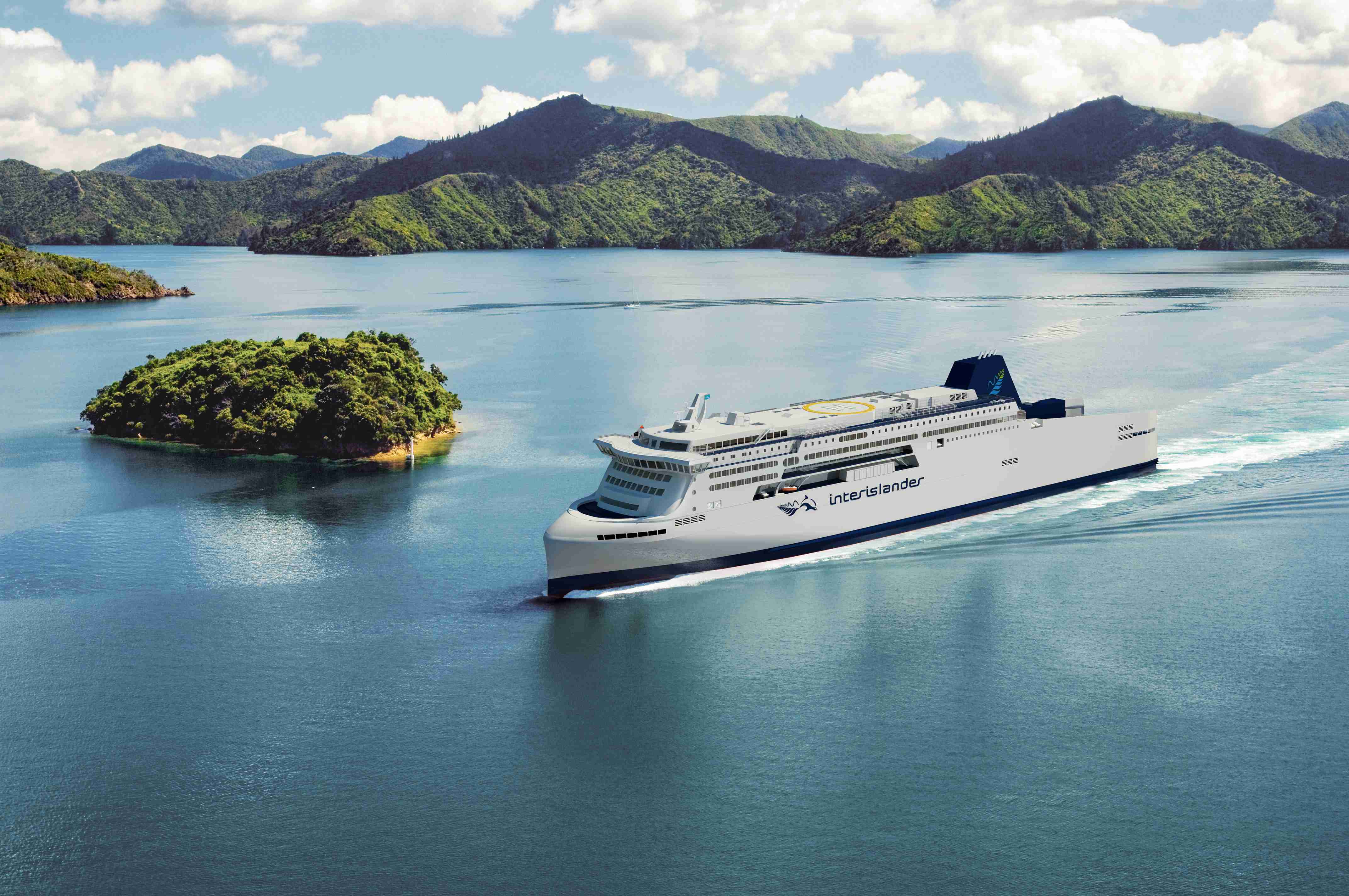 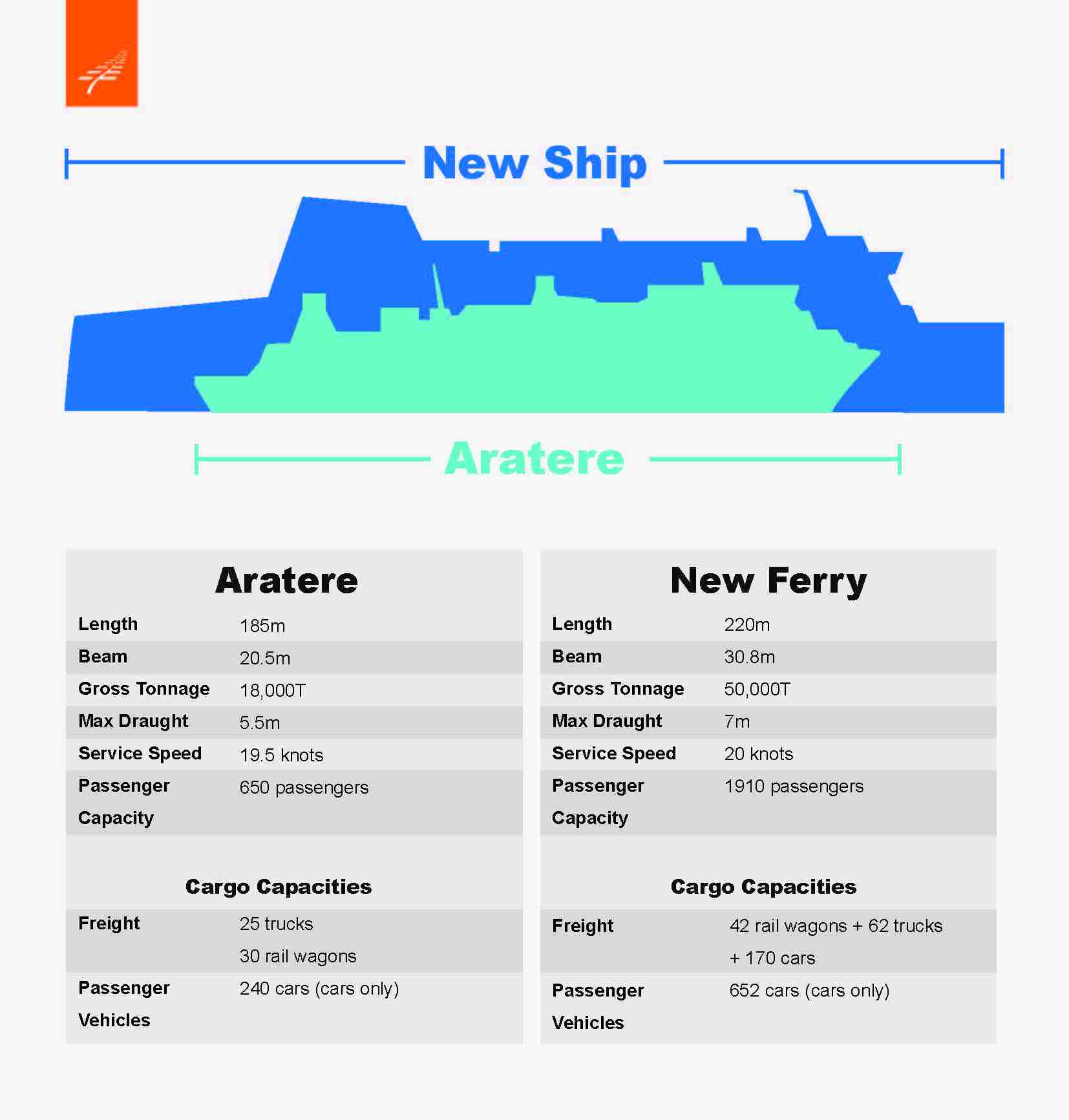