TranzAlpine boost to bring tourists to the West Coast

“The TranzAlpine already makes a significant contribution to the West Coast economy, bringing 82,000 passengers into Greymouth each year which supports around 400 local jobs,” Mr Moyle says.

“Over the summer peak the service is often booked out, so Government support to add two more 63-seat carriages and introduce a new premium carriage is great news for the West Coast.

“High-net-worth tourists will now be able to book luxury services on both the Coastal Pacific and TranzAlpine, creating a longer South Island service between Picton and Greymouth which will attract greater numbers of bookings.

“We expect that close to 120,000 passengers will be using the expanded TranzAlpine service within a decade. The many millions of dollars more those people will spend in the region is expected to support about 290 new local jobs.

“The Greymouth, Arthurs Pass and Christchurch stations will also be improved and KiwiRail will be investing in upgrading our reservation systems and in international marketing for the premium service.

“KiwiRail’s purpose is to create stronger connections for a better New Zealand and we already deliver a million tourists around the country each year on our Great Journeys of New Zealand ferries and scenic trains. The TranzAlpine passenger business has grown by 90% over the past five years, with February and March this year being record months for ticket sales.

“The new premium services on the TranzAlpine, and Coastal Pacific which will offer more space and high-quality food and beverages to go along with the world-renowned scenery, will allow us to tap into the fast growing, international high-value travel market, and deliver even more benefits for the West Coast.

“KiwiRail will also be working with tourism agencies and operators on the West Coast to develop itineraries that connect TranzAlpine passengers with other tourism experiences and accommodation.

“Other Provincial Growth Fund initiatives announced today, such as the development at Punakaiki, are the kind of tourism projects that could make the most of visitors coming into Greymouth on the TranzAlpine,” Mr Moyle says.

“It’s about having a joined-up approach to tourism to encourage people to spend more time on the West Coast, while spreading the benefits of tourism across the region.” 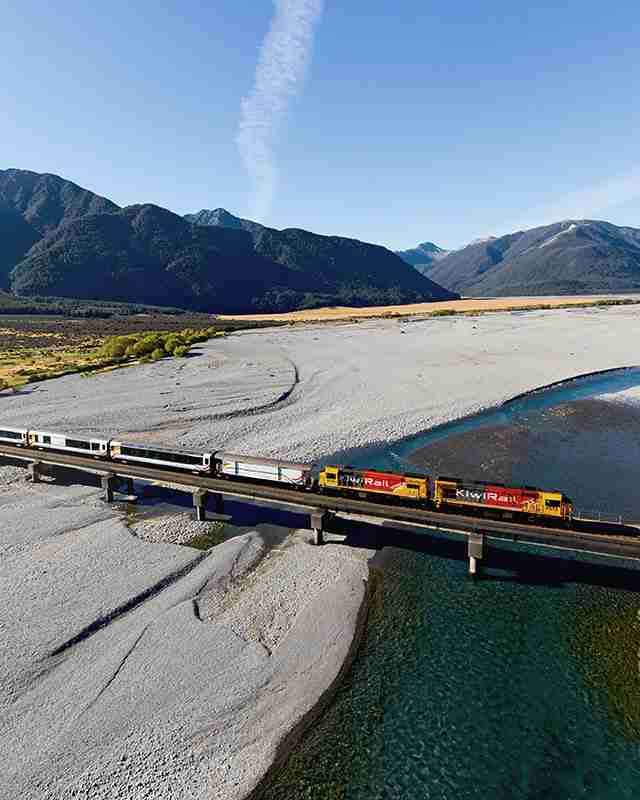 The TranzAlpine crosses the Waimakariri River.